by Johanna Stoberock , in Writing Prompts
I’ve always had a fascination with ghost stories. I love the idea of something being present that is real, and that you can feel, but that you can’t quite see—and even if you could see it, you couldn’t know it in the way you know other things in life. I had a dream, once, while sleeping in a strange bed in a strange house, that a man came and showed me around the room. He opened drawers, and folded clothes, and put them away, gesturing to me how it should be done. When I woke in the morning and told me host, he showed me a picture: the man of the dream was the man who had died in the bed I’d been sleeping in.


That kind of ghost story is the kind that unsettles me in a way I love. Recently, though, another ghost showed up that I'm not quite sure how I feel about.

The other day, I was looking through files I haven’t looked through in years. I’m the type of person who creates files, sticks them in a filing cabinet, and then forgets that they exist. I suspect many people are this way. Anyway, I got it in my head that it was time to give them some attention. At the back of the cabinet was a file titled, “Other Writing.” Other than what? I couldn’t tell you. But there was the folder, practically vibrating with mystery. I pulled it out and opened it up. 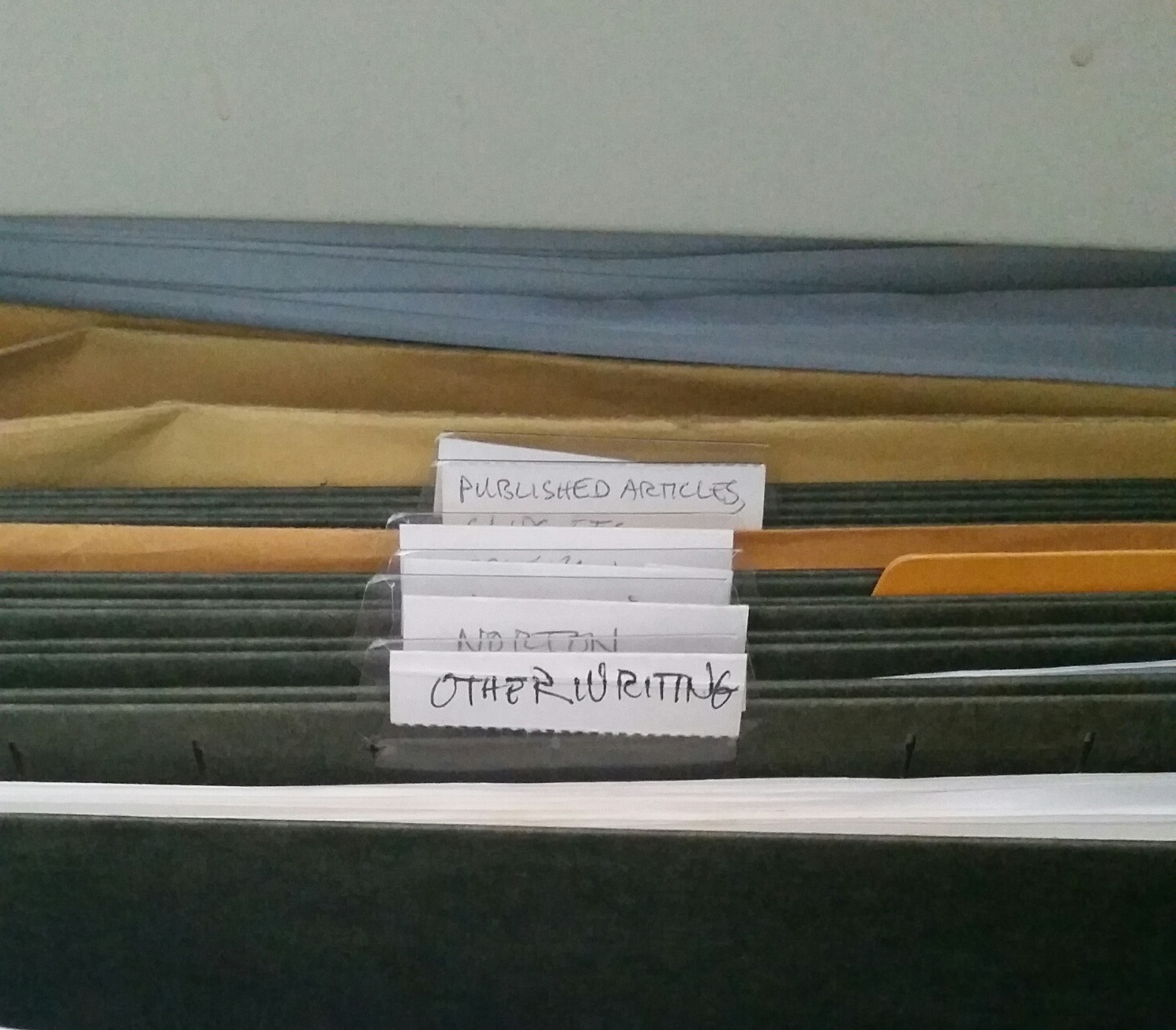 There were lots of things I recognized in there--stories that at one time I'd thought were good but later changed my mind about; early drafts of stories that I eventually published (here's one that was just reprinted); essays from grad school; stories marked with notes from former teachers. I looked through the familiar, and then, squeezed into the very back, found something that I can only call a ghost: a novel excerpt that I have no recollection of ever writing. 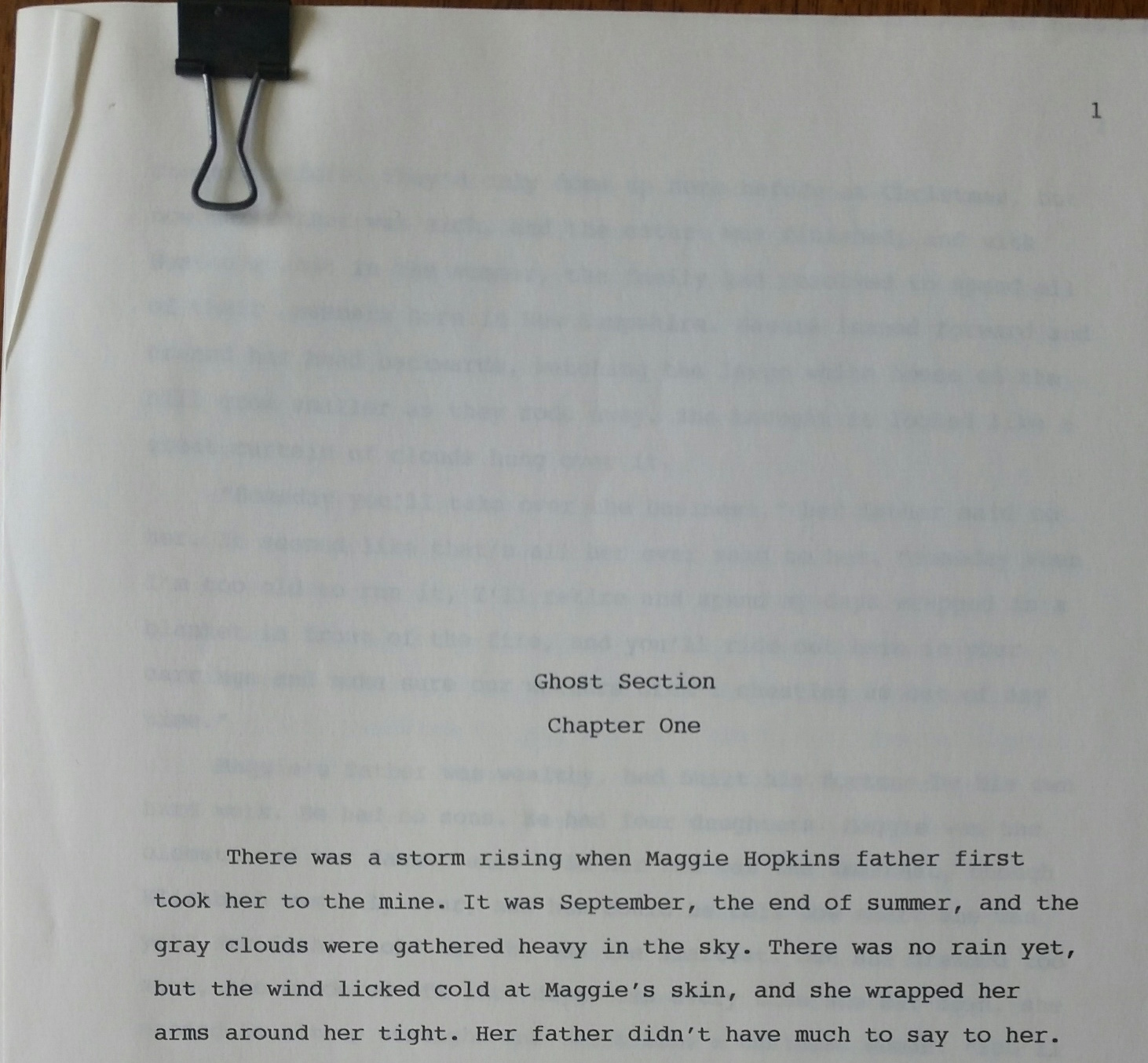 It’s about 60 pages long. It seems to be part of something larger. The characters have back stories, desires, clear attitudes toward one another. Who wrote this thing? How did it find its way into my file?

Here are the things that make me think it was me:

• It was stuck inside a file whose only other contents are stories that I know I wrote myself.

• It's printed in the same font I used for everything I wrote in the 1990’s and have never used again since.

• It’s about ghosts, which I’ve been thinking about since I was a kid and my father told me that a friendly ghost lived in our attic.

• The writing voice sounds like me . . . I think. At any rate, I recognize the logic by which the sentences are put together.

Here are the things that make me think it couldn’t have been me:

• Nothing, I mean nothing, in it rings a bell.

• There’s a section about going down inside a mine. I’ve never been inside a mine. Not only that, the characters who go down into the mine do so in the early 1800’s. I’m far too lazy a writer to do the research that it would take to write about the 1800’s. I did write a practice novel once, long ago that had characters in the present visiting a mica mine in New Hampshire, but never in the olden days.

• There’s a father-daughter relationship in the excerpt that doesn’t feel at all familiar to me.

• Maggie? Why would I name a character Maggie? I love the name, but it doesn't bring any particular image to mind.

I can't decide which terrifies me more: that a self-created manuscript found its way into my filing cabinet, or that I wrote a novel (or a large part of a novel) and have no recollection of having done it.

Which brings me to a final haunting, and the promised prompt of this blog piece.

During my sophomore year of college, I took a poetry writing class with the poet, Vicki Karp. She was a Visiting Professor, only on campus for a single three-hour class each week. For those three hours, it felt like nothing in the world mattered but thinking about words and the energy between them.

Tucked into a folder next to “Other Writing,” I found a sheaf of yellowed, loose-leaf papers. I didn’t save anything from college—not syllabi, not notes, not old papers. But there, in my filing cabinet, was a series of goodbye prompts that Vicki Karp gave our class when the semester was over: twenty-eight prompts, one for every single week left in the year.

And so, a prompt, by way of a ghost found in my filing cabinet:

“Alone, you sneak into an abandoned Victorian house. Old letters are scattered on the floors. Speak to the person whose name appears on them.”—Vicki Karp

I'd love to hear about your own ghost stories--find me on my Facebook page and let me know if you've come across anything recently that haunts you, too.